Saying So Long with the Langfords - SRS-CR: Summerland Relocation Services

Saying So Long with the Langfords 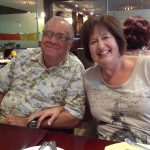 Lynda and Steve Langford have been long standing members of the community for about 8 years, but now we must say goodbye. They made the tough decision of moving back to the United States to be closer to their grandchildren and have easier access to the healthcare they currently need. They will call Phoenix their new home.

As I sat talking with them on their porch among the boxes and bags and luggage, I distinctly remembered the first time I met them down at one of the Summerland pool parties. They had an easy-going nature and I could immediately tell that because of this they were going to enjoy living in Costa Rica and the “Pura Vida” lifestyle. I heard a southern twang and felt that wherever they came from in the United States, they had always been kind and lived a good life. They certainly liked to laugh! As I engaged in conversation with them that very first time, they were approached by one of the local Ticos. Much to my surprise, Lynda responded in absolute perfect Spanish! As it turned out, the Langfords were no strangers to Latin America, nor to Central America for that matter. I came to understand that they became fluent in Spanish when they lived in Argentina and I was very impressed. My own Spanish at that time could hardly even be considered conversational. What Steve and Lynda shared during our “so long” interview was even more interesting …

Lynda and Steve came to CR when they were in their 20’s with 2 very small children in tow. Steve did work as a minister with the Church of the Nazarene and subsequently he was sent to San Jose. Lynda taught English at the language school and before they knew it, they were in love with this beautiful country. Doing everything by bus, Steve and Lynda’s family got to know San Jose and other parts of the country intimately. They “lived like locals” for a little over a year but Steve’s ministry eventually sent them elsewhere. The Langford family went on to live in Peru and then Argentina. Dispersed in between they went back and forth to the States. Originally from Oklahoma, they have also lived in Maine, Kansas, back in Oklahoma and Texas.

Lynda and Steve’s daughter Stevi came back to Costa Rica as an adult as a schoolteacher in San Jose. Because of Stevi’s teaching career, there were some visits for Lynda and Steve over the years. But flash forward 40 years or so and the Langfords came to Costa Rica on one of Jane’s famous Summerland retirement tours. They weren’t a hard sell at all. Lynda and Steve became clients of Jane, as well as fast friends. The next 8 years would provide them with a lot of good memories and the making of many more good friends. Living like locals once again in Costa Rica proved to be a great spot for their retirement.

I had the privilege to use my skills as a photographer with the Langford family when they asked me to do a portrait of them. Their son Chad with his wife and 3 children as well as daughter Stevi (who came back to teach for the second time but now in Uvita after her parents retired) were all present. It was truly a happy moment captured on the hills of Summerland and one which no doubt they will treasure forever.

When asking Lynda and Steve about what they have learned from Costa Rica or what they cherish the most is that you simply “just can’t compare it to anywhere else”. The ‘happy-go-lucky’ nature of the Costa Rican people is contagious. So far (we all agreed) the country and the culture seem to be untouched by the nuances of over-buying, over-selling and the fast pace of much of North America. They treasure nature, family, friends and simplicity. We joked about how initially we all try and impress a local with a gadget here and there for the home and often are let down with a very unimpressed reaction. According to most locals, many times you can just “do it yourself” without going through the trouble of hunting something like that down in the store and spending your money on it. Will the newly opened Walmart in Perez Zeledon have an impact on that? Time will only tell.

Perhaps the most endearing part of interviewing Lynda and Steve for this article was when I asked what they had to say to people who have come to retire here or even if you are just on a visit. Several sentiments have stuck out in my mind:

Sound advice indeed. No doubt we will miss Lynda and Steve; seeing them in the community, chatting now and then and seeing their lovely family visit. But be rest assured. In the heavy heat of the Arizona sun, they will be coming for a visit or two and we will all be too happy to welcome them back. So perhaps it isn’t goodbye to our lovely friends … just “hasta lluego amigos”.